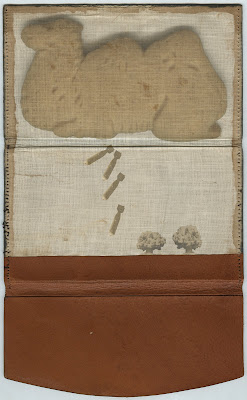 Posted by Keegan Fields at 3:50 PM

The camel fits wonderfully inside the notebook. I am however confused by the message you are sending. It is not clear to me what you are conveying. I could see it as a metaphor for the situation in the middle east. either way i still think it is an interesting manipulation as it is thought provoking. I think that this has become a beautiful object and that technically it looks wonderful. Its almost like a traveler's post card from somewhere in the middle east--- "Wish you were here!"

I almost want the camel to be an american symbol so that it does fit into the context of the middle east. In the middle east they don't drop bombs they drive them, right?

I probably shouldn't have said that...

thanks
i was hoping someone would try to bring politics into it because when creating the image there was nothing backing anything. it was a hangover fart of imagination. but after i created it i did realize it does have a political look.