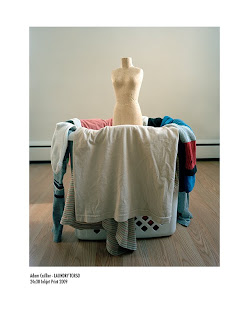 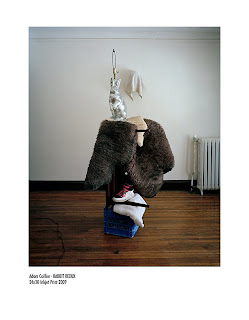 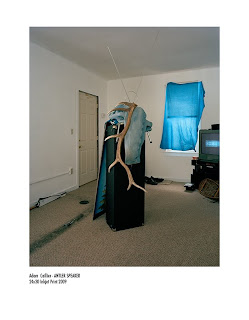 Finally! Me gusta tus fotografias. Are these all in your living quarters? How long to create?

i really enjoy the first two. they seem really thought out. the third looks thrown together. i'm not sure where your going with this but i like it.

Wow, I really like these. Can we see them bigger? It is hard to read the details.

Awesome work Adam!!! You should include your statement

I agree with Ian. Awesome images. I'd like to see them bigger.

Thanks guys. These are all printed/framed at 24x30 for my mid-program review. There are about 10 in the final edit. I \'ll try and post more of them and bigger sometime soon. Here's my statement:

My studio…it isn’t a place, or in a medium, or in a practical experience. It is in a collection of experiences and exchanges.
-Pierre Huyghe

My studio apartment, what can I do from here—from where I am sitting. I developed a strategy to create images, to be deeper in the present, in an effort to bring my work and my life closer together. I proceeded to make fugitive monuments—composed of the stuff of the everyday, to bring what was immediate, yet under-considered, into view.

A short time later, unbeknownst to me, I entered the scene of a crime. While I was out, someone entered and burglarized my apartment. The culprit had obtained a master key to the building, so the entry was not forced. There was a newspaper on the floor that I did not remember. After a bit, I realized the transgression, in an empty space on the floor and on a nearby shelf. I was not angry; I felt strange. I thought of the burglar pacing around, as I had paced, in front of the couch, where I had paced. This experience affected me, in some kind of positive way.

I felt compelled to venture out. I wanted to locate and gain access to other people’s private spaces—to work in found environments. People give me their keys and I enter their homes, while they are at work or somewhere else.

In each location, I encountered a unique set of givens--things were one way, and I made them another way. I used my camera as a way into this activity and to document each alternative moment of composition. Finally, I returned everything back to normal. The photographs are the only evidence; they depict a type of cairn or monument, to an everyday lived experience.

I love it. Can't wait to see more.

That's hilarious! I really dig on the first image, because I have a hard time figuring out the scale of the mannequin. I want it to seem bigger, but everything else tells me it is smallish. And I really like the third one because of the sheet over the window.

mr. c these are great

i just found this guys work, i thought you might like it. his work is fairly similar to yours