new posts and new work on chris toalson's blog. do it. 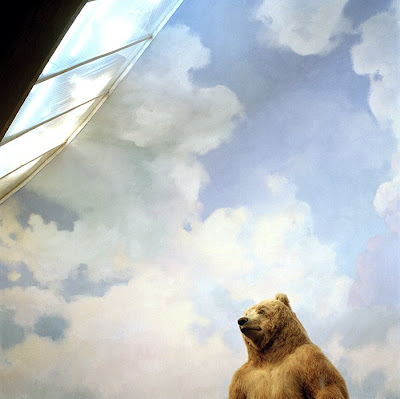 Posted by christoalson at 6:02 PM

Chris, this diorama is working better for me than the earlier ones.

I think these ones work less for me compared to your other ones where there was no reference to the actual display. Maybe in the series as a whole they will mix well.
Are these the ones you got from Denver? Are you going to title these with the locations or anything?

I prefer to see the context. The diorama thing has been done by many photographers, most with a straight on approach where the context is removed. The challenge with such a body of work is to find a fresh take. In my own series I wanted to look at the scenes as a way to look back at how western society views Africa. I would be interested to see you look at the context further. Have you looked at Gary Winogrand's Animals book? Human interaction with these spaces and animals mighty be something to consider too.

Chris, I actually emailed you this morning. I commented there--but here it is to add to the discussion..

'the new work looks really good. The bear picture is my favorite, so far. I also think the obstructed elk (or some horned animal?) is really effective. I appreciate the images that, eventually, bring me back to the truth that these are simulations in a museum. The 'elk' image does this in the least subtle way--but works. If you haven't read it--you've got to read Andy Grundberg's "Crisis of the Real", in particular the 1st chapter/essay in the book of the same name.'

I like the context idea if it was pushed more... It just seemed like a new project when the lights and glass were introduced compared to the previous ones. I agree with Ian that human interactions would add another interesting dimension to these photographs.
I personally want to see the night janitor, or the display manager, or tourists in front of these spaces, but thats just me.

thanks everyone for the feedback.

these images are all from denver except for the one with the bear which is from nyc. i planned on the titles being the same as the name of the actual dioramas that the images came from along with the name of the museum.

ian, i agree with you, it has been a struggle to make this body of work my own when many photographers have approached similar subject matter.

i'm actually really struggling with making interesting compositions and producing interesting images without repeating myself. i'm thinking its time to shift a bit and maybe go off on some related tangents. i'll let you know how it turns out.