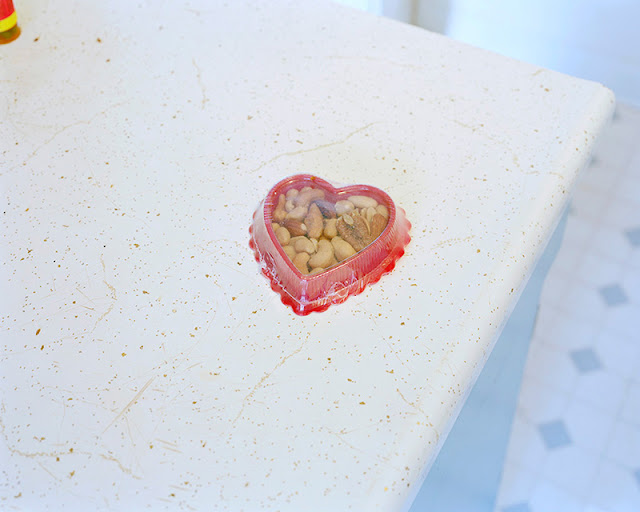 i fond nothing about this image interesting. its very boring. and awkward.

I don't think the yellow/red object in the corner adds anything to the image.

I like the minimalism of it though. The stark, white counter and floor combined with the plastic wrapped heart gives the sense of a very sterile and artificial environment.

I'd maybe mess with the placement and angles a bit more; the corner edge of the counter does seem awkward.

No better way to get into a woman's heart than giving her nuts. I agree with dan about the top left corner. I know what you are trying to do, but it isn't recognizable enough to be effective. (Pill Bottle?)

@cam, it is interesting because the image is awkward and boring. (contemperary right?) I love the image, it breaks a lot of rules like putting something in the middle of the frame and forcing a point of tension on the edge of the frame. But the combination of the 2 makes the image interesting, like you have a grounding point with the heart but the tension on the edges draw you away. if one wasn't there I would find the image either boring or awkward as well.

ALSO It might be my screen, but it looks quite cyan on the floor

the heart seams way more saturated than other versions of this image, i agree with dan the red thing in the corner adds nothing and is kind of distracting.

as far as it being uninteresting or contemporary I'm on the fence. i think you have created much stronger minimalist images "like the soap one". and this one kind of falls flat for me

I am fond of this image, the boring/awkward nature acts as a metaphor for the stages of love.