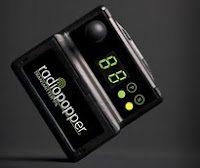 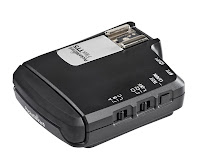 A morning conversation with Jackson prompted me to spend the next several hours doing some industry research. I thought I'd share the results of what I found. There are several systems for wirelessly triggering flashes, notably radio and infrared. The infrared systems are primarly native to Canon and Nikon with many manufacturers introducing radio systems. The two radio system leaders at the moment are Pockewizard (old established company) and Radio Popper.

Wireless basics: The infrared system uses a beam of infrared light to transmit encoded information from a camera, flash or commander unit to remote flashes. The system is limited in range and is line of sight. When a flash is used as a commander in the Canon and Nikon system, they rely on a series of pre-flashes to transmit information about the coming exposure to the remote units. Radio is similar in that the information is sent via radio wave. The benefits are a longer transmit distance and the signal can go through walls, obstacles, etc.

Pocket Wizard has a reliable system for use with studio lighting (Plus II, Multimax) but the introduction of compatability with flashguns (Flex and Mini) came last summer. Canon flashes are highly susceptible to interference and the problem was solved with a cover that's now refered to as the flash cozy (play on beer cozy). The product for Nikon are in production and expected out in 2010. These systems will encode the Canon or Nikon flash instructions directly to radio. The process is very complicated and is the reason why it has taken so long to develop.

Radio Popper is getting a lot of attention as they created a simpler methodology in which the infrared signal is relayed to a device which encodes to radio, transmits, then another device encodes back to infrared and sends to the flash unit. The units are relatively small and have proven to be quite effective. The Px and JrX are their products with the Px being more advanced and costing appx. $250 per unit. Note: you'll need one unit to transmit and one unit for each flash. In testing, the Radio Poppers have proven more reliable than Pocket Wizard for consecutive speed firing and distance. The PW worked up to 120 ft as opposed to the RP which fired up to 620ft. The beauty of the Radio Popper system is that a photographer could actually simultaneously fire flashguns of any brand along with studio flashes. A very adaptable system.

I've been using the Nikon wireless system for a couple years, several hours a day in varying conditions with great success. Nikon and Canon cameras with pop-up flashes can easily trigger a compatible remote flash providing you with terrific off-camera flash opportunites. The systems mentioned above simply allow for more flashes triggered via radio to cover greater distances through obstacles.

It's important to remember at times like this that while the technology is interesting and gadgets are fun, ultimately the skill of the photographer is what creates a great photograph.
Posted by Kelly Gorham at 1:34 PM

Nice write up. Thought I would also add an even cheaper, without going all the way to the Ebay Triggers, set as well. Elinchrom makes a set called the Skyports. They work well and are pretty cheap, $275 for one trigger and two receivers. One of the down sides i've heard is they work on the 2.4ghz range which is used by phones, wifi and microwaves so they can get quite a bit of interference depending on where you are.
http://www.elinchrom.com/products.php?p_id=31#content

Thanks.... I got Pocket Wizards for xmas so i hope they work out for me

just a by the by correction, canon systems are not limited to line of sight. I have run a 430ex off my 580ex (on camera) and had a cement wall between the two units with no problems whatsoever. If i am not mistaken they run on radio, not infrared